Zhuhai Liri Structure Technology Co., Ltd. has been established for 18 years, which is mainly engaged in design, manufacture, sales and rental of high- quality aluminum clear span structure tent systems. After the trials and hardships for almost 20 years, Liri Structure became the biggest company in Chinese tent industry till 2014 with total assets of 120 million Yuan and nearly 500 employees.

Established in 1997, with its self-developed aluminum-PVC tent structure systems and right of self-run export, Liri Structure has exported tents throughout the world including developed countries and areas. In 2002, the self- developed big tent series from Liri Structure were first showed in Canton Fair. With its advanced technology of designing and manufacturing, the domestic and overseas sales performance improved rapidly, which ensured the company’s rapid and stable development, technology improvement and bigger production scale. In 2006, 20 million Yuan was invested to purchase an industrial land of 30,000m2 and build a factory covering 18,000m2 in Xinqing Science & Technology Industrial Park, Doumen, Zhuhai, Guangdong, China. Ten years later, Beijing and Guangzhou Branches were established in 2012. To satisfy the growing production demands, in 2014 Liri Structure purchased 70,000m2 industrial land for expansion, and planned to complete the construction of 27,000m2 new factory buildings in two years. Since then, Liri Structure will be the largest tent manufacturer in the world with 100,000m2 factory area.

As the pioneer in the tent industry, Liri Structure always keeps advancing with the times and leadership of the tent industry. It has passed the accreditation of ISO 9001:2000 International Quality Management Systems in 2006. Base on pursuing the satisfaction of customers and aiming at innovation, Liri Structure introduced advanced ERP system in 2008 to form an integrated management system of material resources, human resources, financial resources and information resources, therefore, efficiencies from production to sales has been increased greatly. In 2013, to manage every piece of goods more effectively and scientifically, Liri Structure introduced bar code management system. With this system, combining the barcode technology and information processing technology,  Liri Structure ensures the accuracy and rationality of inventory, and customers can track whole process from production to sale. 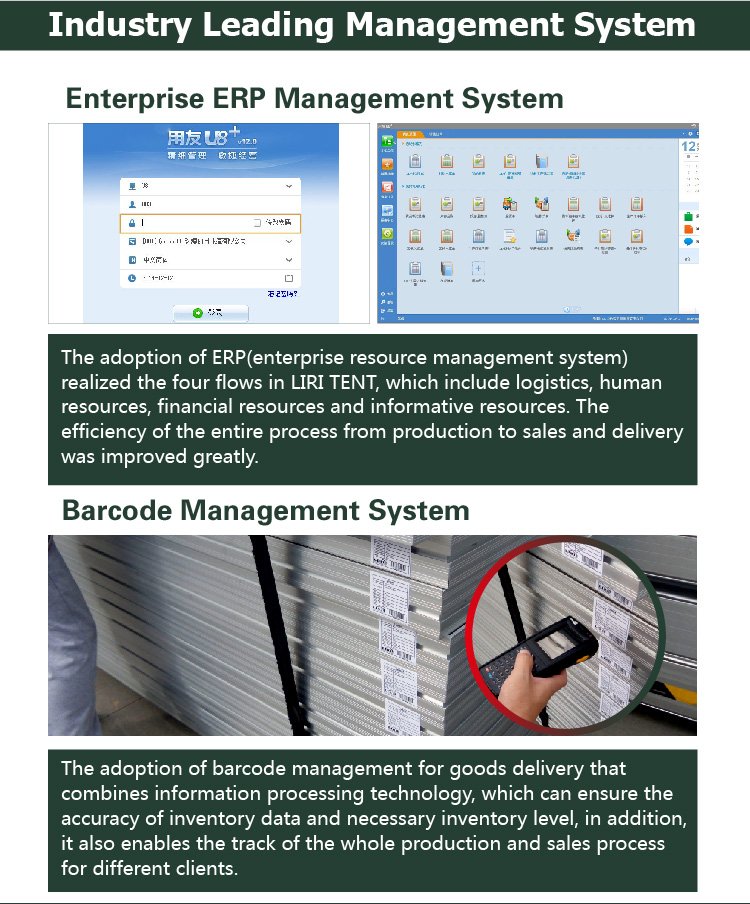 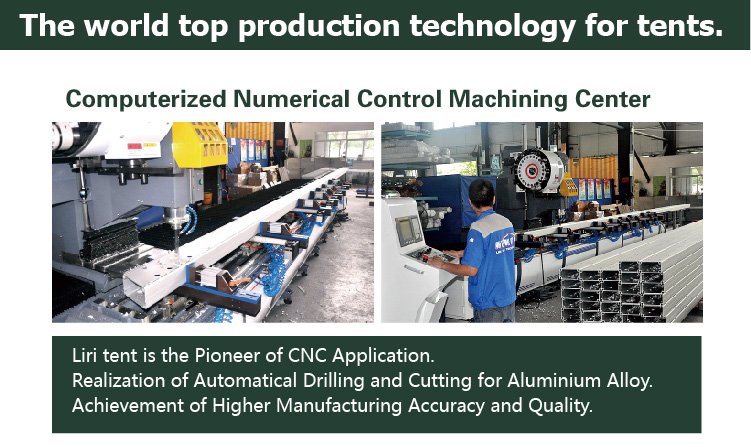 Liri structures are modular structures which adopt hard pressed extruded aluminum and PVC fabrics, with span width range from 3m to 80m. In appearance, there are multiple designs and shapes, such as A shapes, high peak conversions, dome shapes, curved shape, polygon and so on. Liri engineering team is professional and innovative, and masters core technologies in tent industry and has obtained over 10 utility model patents, and become one of high-technology enterprise supported by nation in Zhuhai, Guangdong province, which is under examination and approved. With this professional and innovative engineering team, Liri Structure has gradually developed curve tent series, dome tent series, multi-sides tent series, polygon tent series, cube structure tent series and double decker series and so on.

Among them, Liri “Double Decker Tent for Outdoor Events” has been rewarded as the “Innovative Product of 2013 ” by “GMC•Innovation China” committee; Liri “Mobile Temporary Building—Outdoor Decagonal Tent” has received the Excellent Prize of “Beauty of Made in China 2013” Nearly two decades, Liri Structure with its high-quality and safe tent products as well as efficient, flexible and diversified services had won great compliments from customers. Liri Structure products have been exported to over 100 countries and regions. And Liri Structure has maintained the leading position in tent exporting for 18 consecutive years and keeping stable 25% annual increase in the tent-sale performance. Liri structure products are widely used in exhibitions, conferences, sporting events, weddings, events, warehouses, temporary workshops, military and so on. As a national leader in China Aluminum tent industry, Liri Structure has been doing two main businesses—tent selling and tent rental, and has obtained over 30% domestic tent market share. Liri Structure has been the exclusive supplier or sponsor of numerous domestic and international events, including:

18 years’ journey through thick and thin, Liri Structure has built the business philosophy of honesty, mutual-benefit, reform and innovation, scientific development. The persistent aim of Liri Structure is to provide more abundant and high-quality tent products, to create more valuation for society and to provide a broader platform for the growth of our employees. Liri people will devote more enthusiasm and adopt more standardized management, more distinguishing corporate culture and a more prudent strategic planning to achieve more rapid and harmonious development of Liri Structure.

The 18-years is bound to be a milestone for Liri Structure, during which we have achieved great success; 2015, a new starting point for Liri Structure, but we have already seen hopes not far away. “Day and night double my life; however high, I will fly”, so bold, so ambitious, every Liri people has no reason not to believe that there will be numerous 18-years awaiting us ahead.  http://liri-structures.com/